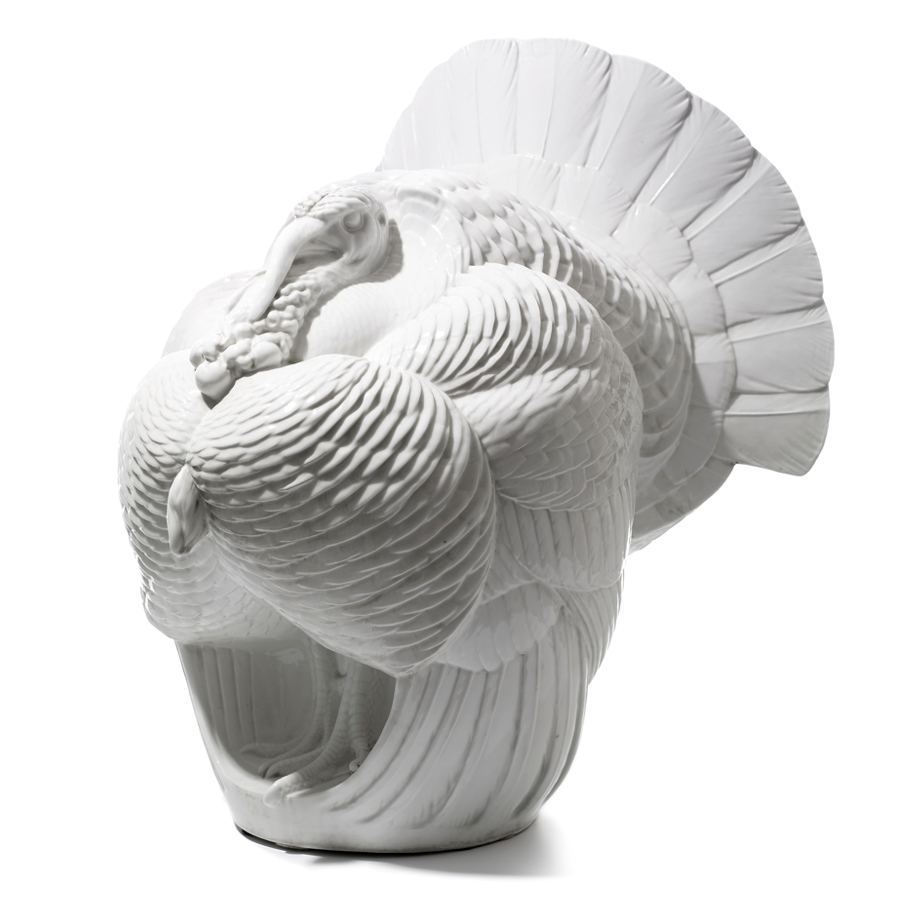 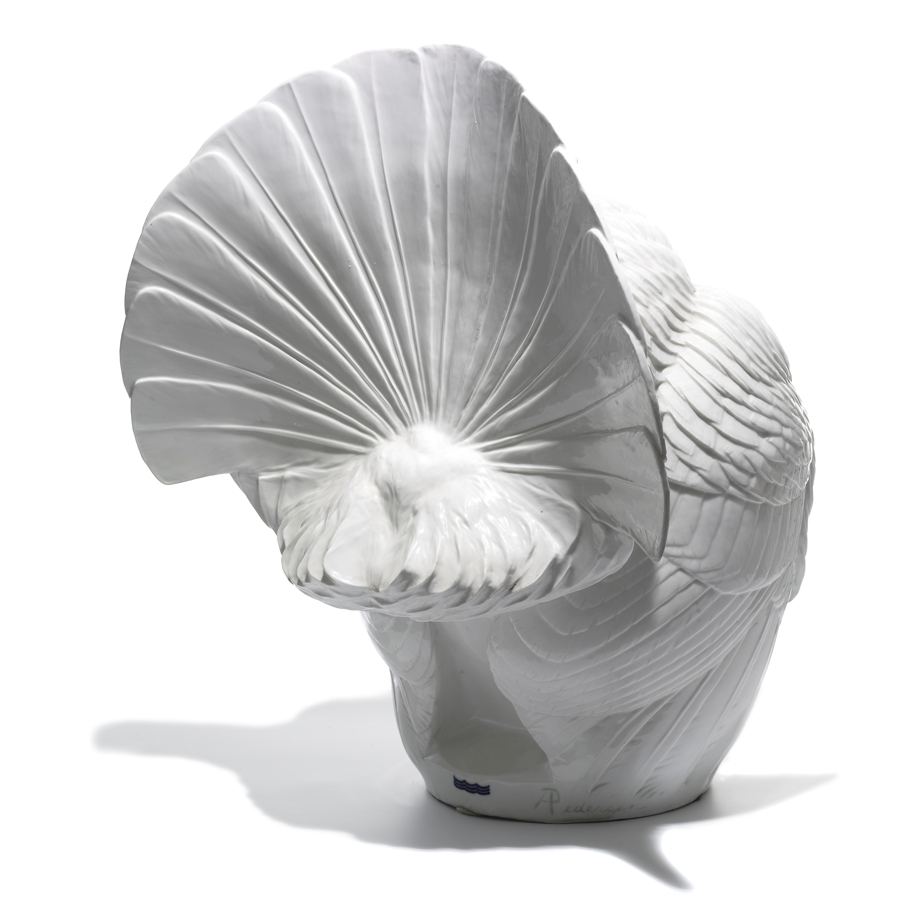 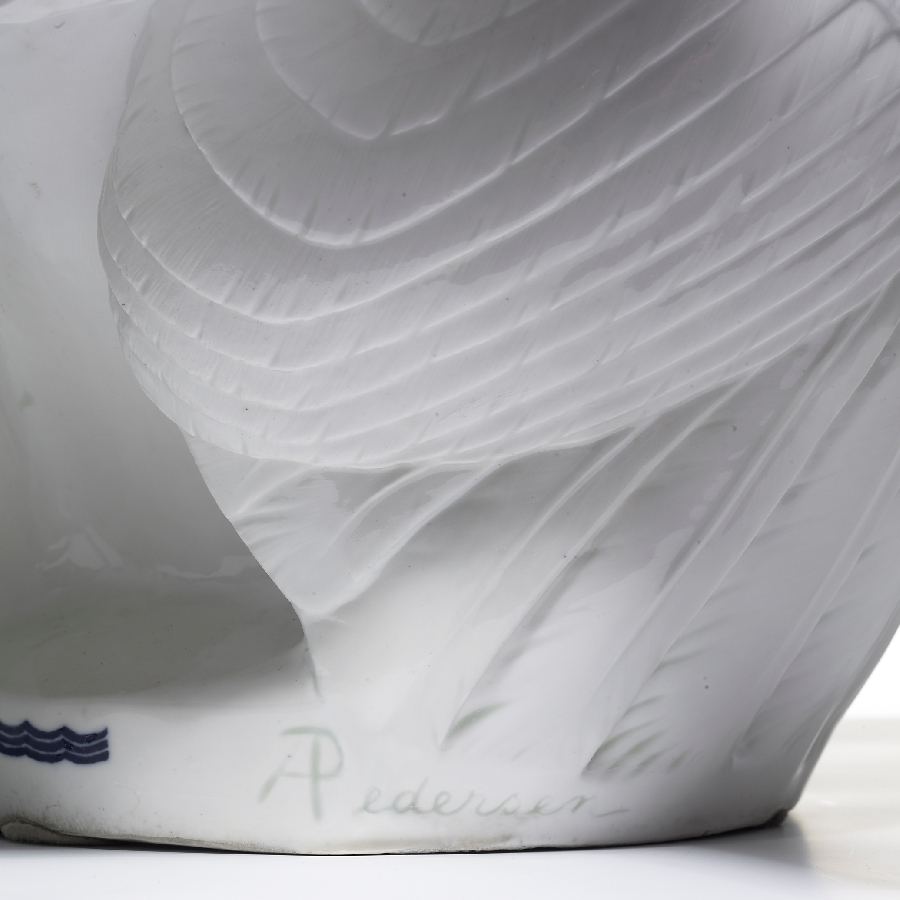 The large, exquisitely modelled porcelain animal naturalistically modelled after nature with its head held back giving an alert impression. Shown with its left talon slightly forward, the chest puffed – up and the tail in fan-shape. The long feathers on either side are modelled curling inwards in the typical Art Deco style.

Only one unglazed stoneware example of this model has been known previously. It is in the collection of the Royal Copenhagen Porcelain Factory and was exhibited outside its stand at the 1925 World Exhibition in Paris. Andrea Pedersen (1872-1936) was 38 years of age when she modelled this large figure of a turkey for the 200th anniversary of the Meissen porcelain factory and as an homage to the work of the famous modeller Johann Joachim Kaendler. As this model was cast from the original mould and not from a secondary working mould, only about 10 – 15 casts could have been made. The factory records show the date of the design and the first cast for 1910. However, as this model is not listed in the factory catalogue of 1913, it had never been intended for regular production.

The life and work of the highly talented Andrea Pedersen is almost forgotten. Nothing has ever been researched or published and only few facts, as an annex to the biography of her husband, are known today . Pedersen was employed as a modeller of animals at the Royal Copenhagen Porcelain factory between 1897-1919. When she married the chief modeller Erik Nielsen (1857-1947) in 1914, she changed her name and ceased to sign in her maiden name which facilitates the dating of our present turkey. Her bold, very early Art Deco design should be seen as the almost revolutionary answer of the new generation to Christian Thomsen’s model of a turkey which he made in his meticulously accurate naturalistic style ( Hayden, 1913, pl. CII).

Thomsen and Pedersen clearly modelled their respective models after nature. It is amusing to see a contemporary photograph of the factory’s courtyard showing three turkeys amongst workmen shovelling porcelain shards (Hayden 1913, pl. CXIX).

The Rediscovery of an Art Deco Turkey

The recent discovery of a previously unknown large porcelain turkey led to the reassessment of Andrea Pedersen (1872-1936), a modeller at the Royal Copenhagen porcelain factory during the late 19th and early 20th century.

The great artistic and commercial success during the ‘Modern Renaissance’ or ‘Revival’ period of the Royal Copenhagen Porcelain factory was due to Philip Schou’s radical changes in production technology and the artistic vision of its director Arnold Krog. After Schou had taken over the factory in 1884, he immediately installed the most modern machinery available. To ensure not only commercial viability but also artistic innovation, he appointed the young architect Krog as artistic director in 1885. With the arrival of the modeller Christian Thomsen in 1898, the factory embarked on a new, ground breaking series of modern animal sculpture. When the decoration of the Flora Danica service was intended to render accurately Denmark’s plant life, it was the artistic intention now to show animals in a new interpretation of Naturalism. The artists meticulous, highly professional modelling combined with the factory’s modern technology and the new imaginative observation of nature are all reflected in the wide range of models made at the Royal Copenhagen Porcelain factory during the late 19th and first half 20th century. These porcelain models measure from less than 10cm to over half a meter in height, each based on animals living in the factory’s own aviary or in the zoo nearby. When discovering the present model of a large turkey, it was the enormous size of 66cm, as well as its unusual Art Deco design which impressed most. This Danish porcelain sculptor created her turkey in a style which is usually thought to begin only after the First World War and which could well be compared with the forward looking designs of Charles Rennie Mackintosh or Joseph Hofmann.

Only very little is known of Andrea Pedersen. She lived in Copenhagen from 1872-1936 and is recorded to have worked as an animal modeller at the Royal Copenhagen Porcelain factory between 1897-1919. She created more than forty models of animals during these years but her work has never been researched. Until her marriage to her colleague, the animal modeller Erik Nielsen (1857-1947) in 1914, she signed her work with the initials ‘AP’ or, as in this present case, with her full name ‘APedersen’ (sic). Having changed her surname, she began to sign with her new initials ‘AN’.

A fact which might explain why this highly talented artist was almost forgotten. Her designs are in spirit reminiscent of her husbands models. Comparing the works of these two colleagues, it becomes obvious that husband and wife enjoyed a similar perception of nature and Zeitgeist. Nevertheless, each of Andrea’s animals shows her sensitivity for the character of her subject. She was capable to create animated characters of natural liveliness; The positioning of the animal’s feet, its typical movements ‘frozen’ at unusual moments, all distinguish her models from those of her contemporaries. This different, more modern approach might have been the reason as to why Arnold Krog entrusted her and not any one of her male colleagues, with the task to create one of the largest Royal Copenhagen porcelain sculptures as an homage to J.J. Kaendler and the 200th anniversary of the Meissen porcelain factory.

The large turkey is incised with the model number 1222 and is listed in the factory’s sales records for the year 1910. It is no longer in the factory’s sale catalogue of 1913 and probably never intended for regular production. The only other known example of this model is made of stoneware and is in the collection of ‘The Royal Copenhagen Museum’ at the factory in Copenhagen. This stoneware example can be seen in a photograph of  the Royal Copenhagen Porcelain factory’s stand at the ‘Exposition Internationale des Arts Décoratifs en Industriels Modernes’ in Paris in 1925. It is highly astonishing to see a fifteen year old sculpture presented at such a prestigious occasion for modern design only underlines the importance of this forward looking, creative model.

In 1904, Christian Thomsen had already created a porcelain turkey of 18cm height.1 Kaendler, as well as Thomsen and Pedersen designed their models from life. The Meissen modeller drew animals in his surroundings and in the menagerie of his sovereign, Augustus the Strong; Thomsen and Pedersen only had to look into the courtyard of their factory in order to study the movements of turkeys.2  Their perception, however, is fundamentally different.

Kaendler’s baroque turkey illustrates his triumph over the technical difficulties of firing a large mass of china clay. The firing cracks and nervously sculpted surface are reminiscent of Italian bronzes cast in the 15th century (Ill.1). His bird is looking inquisitively to the right, the long neck is modelled independently from the body and the bird is shown standing on a naturalistic base moulded with ferns (Ill.2).

Thomsen’s small turkey was designed in the so-called ‘Modern Renaissance’ style, which was followed at the Copenhagen factory during 1885-1911. It is perfectly fired and decorated with recently invented under-glaze colours, showing the natural markings of the bird in delicate tones of grey without individual brush-strokes. It thus reflects the impressionist style in ceramic art. Looking angrily, he is shown standing still on a simple base with the head embedded in the shoulders (Ill.3).

Andrea Pedersen’s bird is shown striding forward, almost off the base. As turkeys move their head back and forth whilst walking, it had to be embedded in the shoulders. This was a simple, ingenious artistic solution to avoid the danger for a slender neck to break during the firing or afterwards. Together with the stiff long feathers on either side curling inwards in the typical Art Deco style, Andrea Pedersen created a dynamic of movement that was previously unknown in animal sculpture.

I would like to thank Mrs Ulla Houkjaer, Inspector at the Kunstindustriemuseet, Copenhagen, and Mr Steen Nottelmann, Director of the Royal Copenhagen Museum, Copenhagen, for their invaluable information on A.Pedersen and the archival references.

Angela Gräfin von Wallwitz 2022 - All Rights Reserved
Back To Top