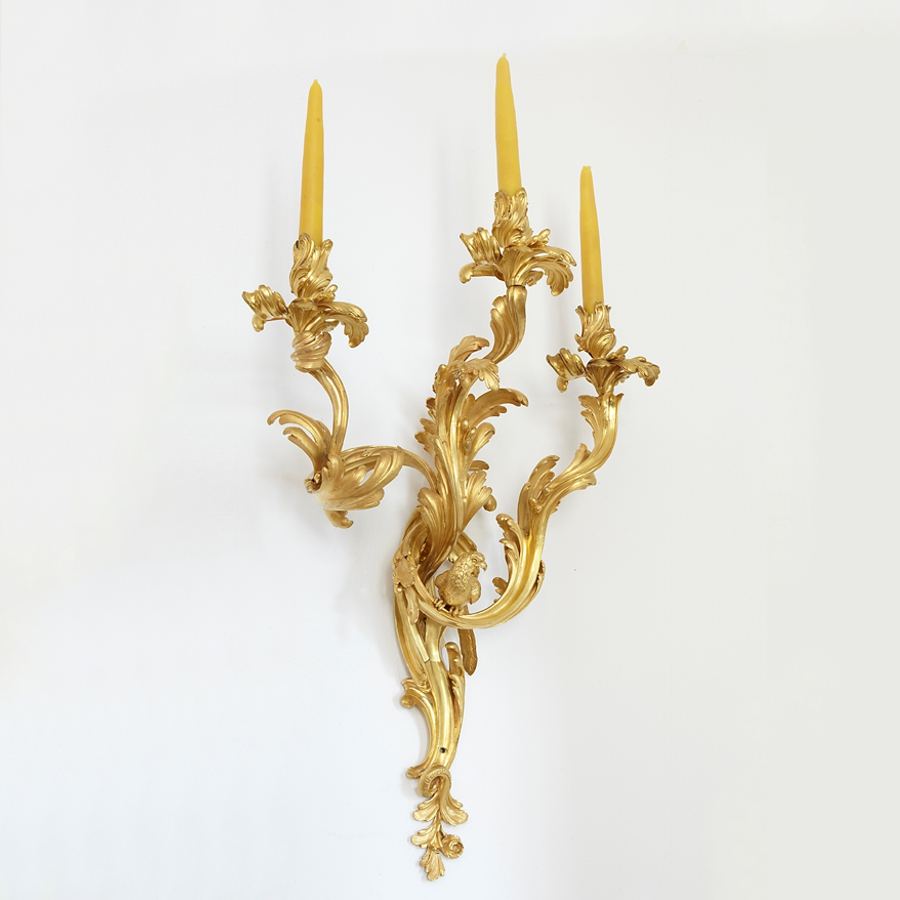 No changes or replacements. Small drilled holes for electrification filled; According to Lazare Duveaux and other source references, fire and lighting equipment had to be re-gilt every 10-15 years. For lighting fixtures, this was not necessary anymore after the invention of electricity. Some areas were re-gilt recently during the removal of the electrification.

The distinctly turned body raised on a sharply grooved, low foot and decorated with pointed scallops.

Acquisition of the Museum of Fine Arts, Boston

(“…This pair, unusual for the life-sized parrots perched on the lower branches, was the largest size available in the 1750s and recalls others commissioned by members of the French royal family. The acquisition of these wall lights places the MFA in the front ranks of American museums with notable holdings of French decorative arts.” (https://www.mfa.org/annual-report-2017/acquisitions.html)

The present pair of wall lights was found in the estate of a member of the Imperial Austrian family in 2005. They had been passed down from the so-called ‘red Archduchess’, Elisabeth Marie von Österreich (1883-1963), daughter of crown prince Rudolf, granddaughter of the Empress Elisabeth (Sissi) and Emperor Franz Josef.

It might be of interest that the daughter of the Duke and the Duchess of Parma, the Infanta Isabella, was married to the future Emperor Joseph II in 1760. It is possible that this pair of wall lights formed part of her dowry. Unfortunately no inventory of her dowry has so far been found in the archives in Vienna, Parma or Madrid

A large ormolu-mounted celadon dish, attributed to Jean-Claude Duplessis, in a private collection in New York was mounted by the same workshop/hand as our present wall lights. This dish, part of a ewer and basin, is recorded to have been in the collection of Katherine the Great in the Eremitage in St. Petersburg.

Each designed in the Louis XV pittoresque style with a parrot perched amongst three branches of scrolling laurel leaves and berries, terminating in particularly strongly modelled drip-pans. The finely cast sconces include fines details to imitate laurel berries and moss. To underline the particularly strong dynamic scroll-lines of the branches, drip-pans and sconces, polished lines are delicately placed next to matted chasing. The backplate terminating in c-scrolls with flowers and include the original screws.

Parakeets are a symbol for monogamous love.

Other examples of this model are mentioned in the Caffieri inventory of 1747 but not any longer in the inventory of Philippe Caffieri’s workshop of 1770.

The attribution to Jean-Claude Duplessis is based on his designs for Vincennes and Sèvres with very similar dynamic scrollwork and the use of laurel leaves and berries on the Bureau de Roi in Versailles.

However, the particularly fine chasing of the gilt bronze and certain aspects of the design could refer to Thomas Gérmain who was, contrary to the two masters above, a very fine silversmith as well as a highly sought after designer of bronze d’ameublement in Paris in the mid 18th centuy.

These wall lights were tested with the XRF method by Dr. H. Piening, physisist and Director of Furniture Restoration at the Bayerische Verwaltung der Schlösser, Gärten und Seen in Munich. They were tested alongside a number of French and Bavarian ormolu objects in the Residenz, Munich. Each of these ormolu objects were documented when they came into the Royal Bavarian collection during the first half 18th century and can therefore serve as a secure reference.

It has been suggested that, due to their unusually large size and exceptional quality, this pair of ormolu wall-lights would have hung only in the most important châteaux of the mid 18th century. In France, this could have been the châteaux de Versailles during King Louis XV (15.2.1710-10.5.1774) or one of the châteaux of the Marquise de Pompadour (December 1721 – 15.4.1764). A pair of highly important chandeliers, formerly in her possession, are now in the Bibliothèque Mazarine in Paris. They are attributed to J. Caffieri and include several birds, all however of very inferior chasing.

Stylistically close are the present wall lights with the large order of ormolu objects of Louis XV’s daughter, Louise Elizabeth of France, Duchess of Parma. She ordered a number of ormolu objects from the Caffieri workshop during her visit to Paris in the early 1750s (she returned to Parma in 1753). Two pairs in very similar style were supplied to the Infanta for her Palazzo Colorno near Parma. One pair with two branches (H 56cm x W 47cm) includes birds with very similar chiselling style to those on the present three- branch wall lights (See (See A.Gonzales-Palacios, Gli Arredi Francesi, Milan, 1955, no. 52, p. 243). They are recorded in the Inventory of 17.2.1769 and are stamped C-couronné.

A pair from the Wrightsman collection is in the Metropolitan Museum of Art, see H. Ottomeyer and P.O. Pröschel, Vergoldete Bronzen, Munich 1986, vol. I, p. 143.

A pair of wall-lights of the same quality and size came with the 1860 inventory mark of the Palazzo Colorno, was in the Hubert Givenchy collection and sold at Sotheby’s Monaco 2.12.1993. It was sold by Malletts in May 2010.

A large gilt bronze mounted Chinese black and gold porcelain pot-pourri and cover (1736-1795), from the Dimitri Mavromatis collection, with no provenance before mid 19th century,

Angela Gräfin von Wallwitz 2023 - All Rights Reserved
Back To Top