Circa 1550
Acquired for a private collector, Hamburg 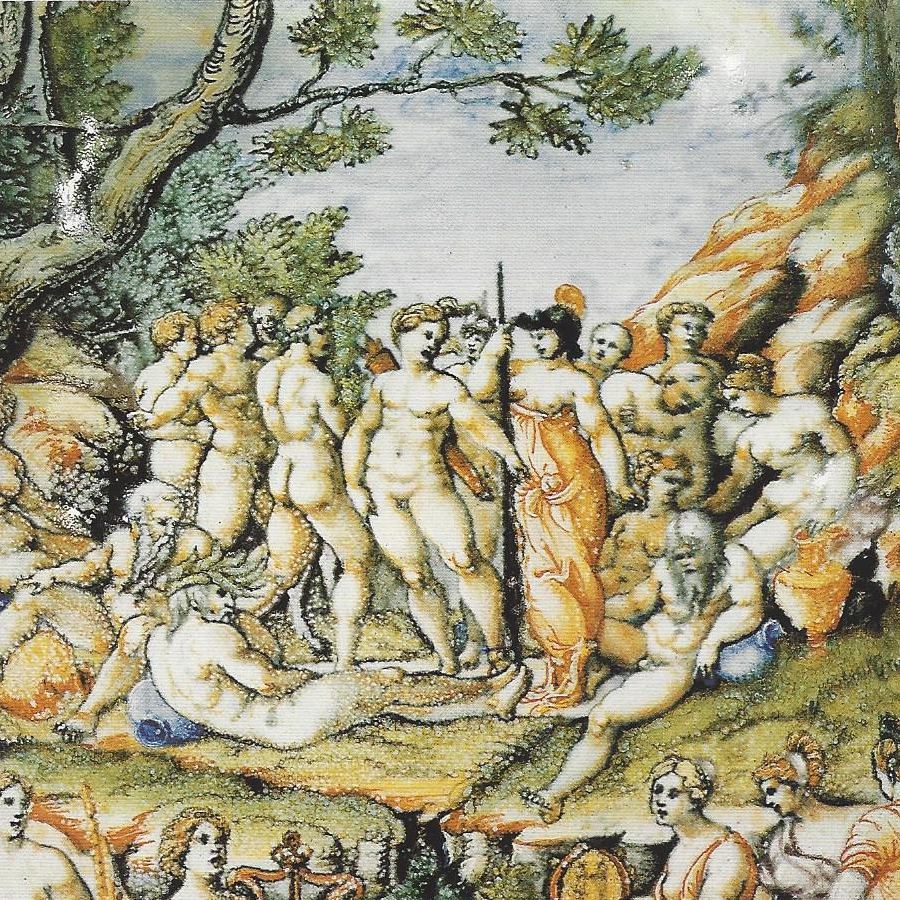 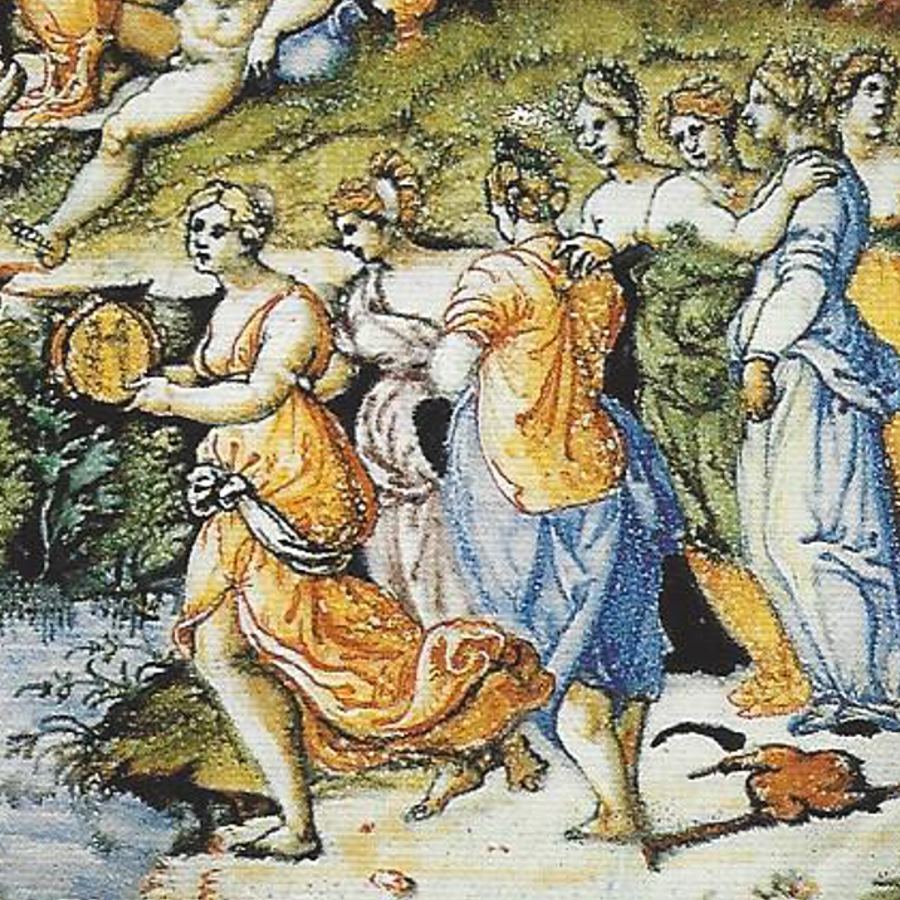 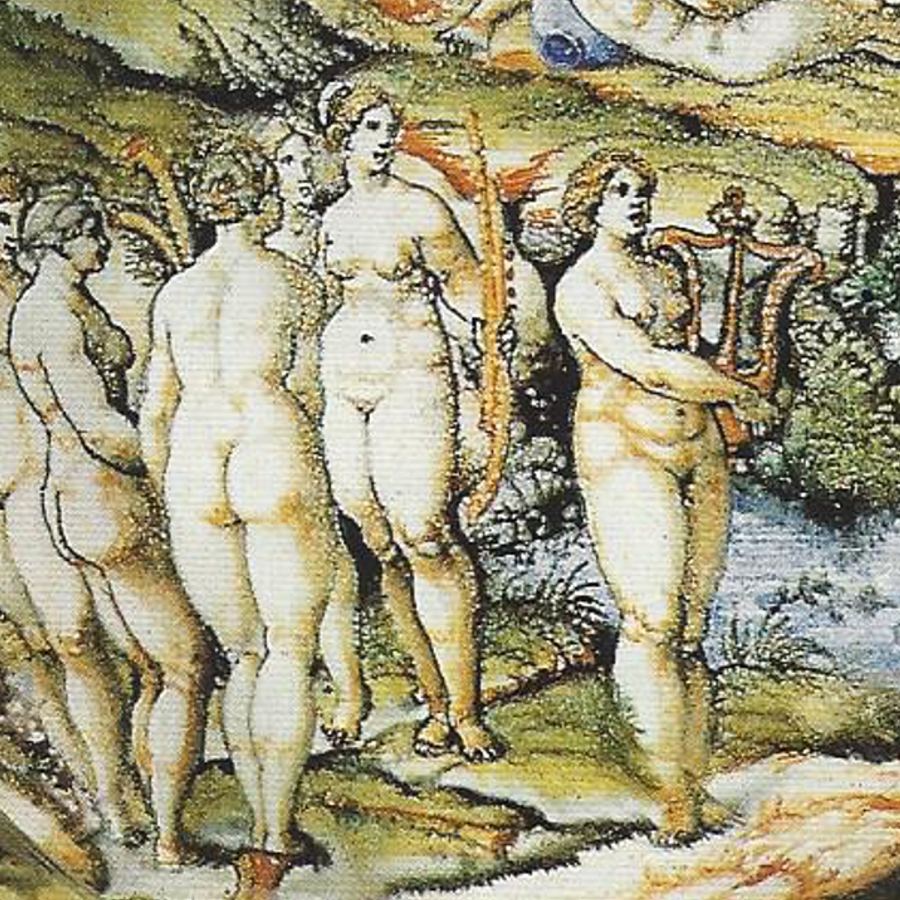 The trefoil bowl applied with grotesque masks below scrolls along the rim at the juncture of each lobe
and raised on a tripod paw-foot pedestal base, the interior of the basin painted in blues, greens,
yellows, ochre and manganese on a cream ground with ‘The Contest Between the Muses and the
Pierides’, the exterior painted with rocky landscapes, the underside with paper loan label inscribed
“on loan from A. Barker Esq, Aug 22. 1860”.

As recounted by Ovid in “Metamorphoses” the daughers of Pereis, king of Emathia, thinking their
song was sweeter, challenged the Muses to a contest and, as a consquence, were turned into
magpies.

The decoration of the cistem is based on an engraving by Gian Giacomo Caraglio after a design by
Rosso Fiorentino [Illustrated ‘Bartseh’, Vol. 28, no. 53 (89)] (Fig. 1). Another wine cooler from
the same workshop and based on the same graphie source is known. Cf. Anonymous sale;
Sotheby & Co, London, 29 June 1964, lot 15. Most likely the example formerly in the

Spitzer Collection (Chevallier & Mannheim, Paris, 17 April – 16 June, 1893, lot 1120), it is virtually
identical in decoration and shape to the present example. The sides of the lobes are slightly more
vertical and the landscapes on the outer sides more detailed and with added architectural elements.

There seem to be three different models of trilobate cistems: one with plain sides, one with goat’s
head handles and one, as in the present example, with cherub-head handles. All are usually attributed
to Urbino. Only Jeanne Giacomotti attributes a ‘goat’s-head-handled’ cistern to Venice. For another
example of similar form see J. Giacomotti, “Les Majoliques des Musees Nationaux”, Paris 1974, no.
1336, attributed to Venice. Whilst the same shape is attributed to Urbino by T. Wilson in “Ceramic
Art of the ltalian Renaissance”, London 1987, pp. 154 and 155, no. 243.

Other ci sterns identical in form to the present example but with decoration based on different
engraved sources are known. Cf. O. Van Falke, “Sammlung Richard Zschille, Katalog der
Italienischen Majoliken”, Leipzig, 1899, nos. 109, 104. Also known are “istoriato” wares varying in
shape but with decoration based on the same graphie source. These include a large documentary dish
formerly in the collection of Sir Otto Beit (Rackham, “Beit Catalogue”, no 838), a vase formerly in
the Spitzer Collection (“Collection Frederic Spitzer”, Vol IV, no. 83, pl. 17) and a dish formerly in
the collection ofDr. Alfred Pringsheim depicting only the lower left scene (Sotheby & Co, London,
19 July 1939, lot 274).

See also another example by the same painter in the Bargello in Florence;

Angela Gräfin von Wallwitz 2023 - All Rights Reserved
Back To Top